Menu
Christian Morrisseau
All Of The Colours
Visit The Gallery

Christian Morrisseau was born and raised in Red Lake, Ontario. He is the son of the renowned Woodland Artist, Norval Morrisseau, and the 2nd child to follow in his father’s footsteps.

The love of art is a Morrisseau family tradition. His love of this style of art was passed down to him by his father, Norval, who in turn had learned it from his grandfather Potan, who was a well-known and respected traditional Shaman. Christian learned and listened to his father’s teachings, and was inspired to begin painting in May 2002.  He paints his animal images, landscape, his family, his traditions, and his legends. Christian is developing his artistic gifts with intensity, discipline, and passion. One of his first paintings was purchased by the Minister of the Department of Indian Affairs, Robert Nault, for a gift presentation at the historical treaty signing between the Inuit and the Government of Canada, in October of 2002.

Christian also teaches the Woodland art style to both native and non-native students in Thunder Bay, and across other northwestern Ontario communities. Christian Morrisseau’s work can be found throughout Canada in Ottawa, Toronto, Thunder Bay, Windsor, Winnipeg, Vancouver and Qualicum. 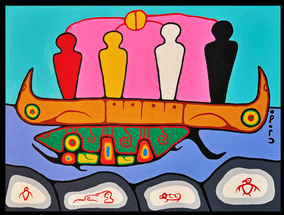